As one year was completed on my FSFE Fellowship a suggestion was made to me to be a candidate for the General Assembly fellowship seat of the Foundation. I didn't have a reason to reject this proposition so I took the chance to be a candidate.

As a member of the General Assembly of FSFE I believe I can learn from other people and be given the chance to contribute in a more efficient way. You can read my General Assembly Membership Roadmap, in which I describe how exactly I'm thinking about my participation in this body.

The last but not least (in contrary is the top) priority is to create stronger bonds between Greece and Balkan countries. The reality is that after the collapse of the Soviet Union and the Yugoslav Socialist Republic, many incidents of nationalism slow the progress, the fraternity and among other things the promotion of Free Software in this area.

I believe that we can put an end once and for all to this situation by doing a simple thing: cooperation. Only by cooperation on Free Software issues we can go forward and enjoy the fruits of progress and prosperity. 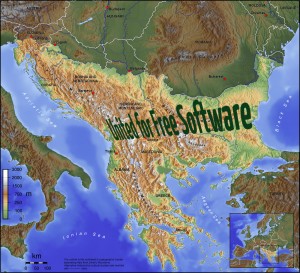